Stevie B with PM Dawn

A new era of dance music was born when a Miami native Stevie B’s first independently released single, “Party Your Body,” hit South Florida’s glittering club scene in 1987. Stevie B’s skills as a writer, producer and performer thrust him into the pop spotlight. “Party Your Body” worked its way up across America, eventually selling over 200,000 copies, an amazing achievement for an independently released single.

In 1989, Stevie B’s sophomore effort, “IN MY EYES,” showed him growing as an artist, as the songs took on a much more sophisticated flavor. In addition to his trademark dance songs, the album also featured smooth and soulful ballads and giddy pop tunes. The first single, “ I Wanna Be The One,” solidified Stevie’s crossover into the pop market as the song rose into the Billboard Top 40. However, it was the power ballad, “Love Me For Life,” that took Stevie B all the way into the Top Ten and made him the artist with the highest debuting song in the history of R&R magazine. Like its predecessor, “IN MY EYES” went on to RIAA Platinum status, setting the stage for Stevie B to become a household name worldwide.

Though the record debuted in the Top 10, “LOVE & EMOTION” was released in 1990 to the little fanfare. In fact, it was largely ignored until radio stations began getting slews of calls for “that song about the postman.” “That song” was, of course, “Because I Love You (The Postman Song)” and it too would be a highlight and pinnacle for Stevie B. As soon as the song was released as a single, it rocketed to #1 and remained lodged there for four weeks, ultimately becoming the biggest single of 1990. All around the world, “Because I Love You” was a top hit “rising to #1 in Japan” with “LOVE & EMOTION” garnering RIAA Platinum status at home.

Over the course of five years, Stevie B accomplished more than most artists can say of their careers: three RIAA Platinum albums containing a total of thirteen Top 40 dance and/or pop singles and one classic #1 hit. From heart-stopping ballads to hip-shaking dance songs, Stevie B does it all.

Organizer of Stevie B with PM Dawn More Events The Steel Woods with The Wilder Blue in Rome, GA 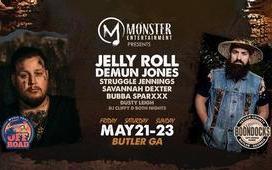