Sexy, funky-as-hell, pop music" is what critics are saying about
Gurufish (Ear Magazine). Electrifying audiences everywhere
with their own provocative blend of pop, funk and soul, Atlanta's Gurufish is best known for their high-octane live show fueled by irresistible melodies wrapped around hypnotic, funky grooves. After a great start to the year with a sold out showcase at SXSW, Gurufish was listed by PASTE Magazine as one of the 25 Georgia Bands You Should Listen to Now. They were also honored with the distinction of being recognized by the GA Music Awards as Georgia's Best R'nB/Funk Band and recently appeared as featured
performers on the CW network's "The Originals".

Founded by singer/songwriter/producer Jimmy St. James, Gurufish performs live as an 8 piece ensemble with Matty Haze on guitar, Steve Dixon on drums, Trey Williams on bass, and a full horn section. They are currently playing dates in support of their critically acclaimed release,"Mohair Supreme", while recording and preparing for a new release in the fall of 2016. Gurufish has shared the bill with such prestigious acts as: Meaghan Trainor, The Brand New Heavies, Mother's Finest, Nikka Costa, Derek Trucks, The Flaming Lips, Galactic, Cypress Hill, Ghostland Observatory, P.M. Dawn,The Spin Doctors, Colbie Caillat, The White Stripes, LMFAO, KC & the Sunshine Band, The Isley Brothers, Foreigner, and the P-Funk Allstars.

Few bands represent the Atlanta rock scene from the 90s and 2000s like the seminal group THREE5HUMAN. When a mutual friend introduced vocalist Trina Meade to Tomi Martin, one of the most sought-after guitar players in popular music by every superstar from Eric Clapton, Outkast, and TLC to Madonna, Toni Braxton, and Michael Jackson, an immediate chemistry was formed. However, Tomi was not yet convinced that Trina would be the lead vocalist in the band he wanted to form. That is until Trina decided to prove to him that she could not only sing like no other, but she was also blessed with the ability to write great songs. Soon after, the band was formed, with Sean Michael Ray (bass), and Melvin Baldwin (drums) rounding out the group that would change the musical landscape of Atlanta.

With a sound that was rich, raw, and filled with great passion, they soon caught the attention of stars such as Amy Ray and Emily Sailers of the Indigo Girl, who immediately asked THREE5HUMAN to join them on tour as their opening act. Amy and Emily believed in them so much, they lent their vocals to THREE5HUMAN’s album, A Swig from the Acid Bottle. THREE5HUMAN’s other critically-acclaimed albums are Flying Below the Radar and Sunlight & Toys.

The band has performed together on and off over the years for special engagements while they all pursued other engagements and passion projects. However, they always yearned to play together and create new music.

Purchasing a General Admission ticket does not guarantee a seat/table.

Additional reservations are not required if a table, booth or banquette have been purchased via Ticketfly.

PLEASE NOTE: If earlier dinner reservations are made, your seats are not guaranteed for the show. For example, it is unlikely to be able to reserve a table at 8:00pm and keep it for a 10:00pm show. The only way to guarantee a seat for the show is to purchase table, booth, or banquette tickets.

Reservations for the Captain’s Room (private dining room) can be reserved for parties of 10-24 guests. For more info contact info@venkmans.com 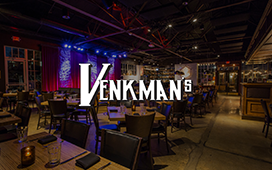 Roberta Setzu “AS YOU ARE” Album Release Concert

Wilder vs Fury 2 at Saloon